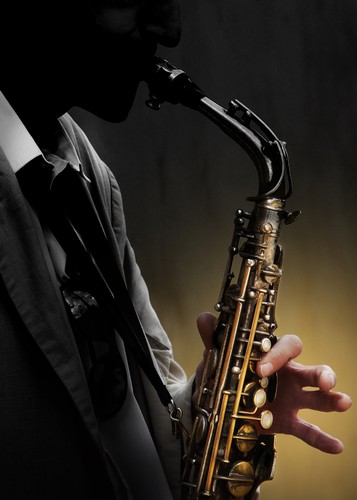 In the 1920’s African-Americans and their culture greatly influenced the arts. This influence came from what was called the “New Negro Movement” better known as the Harlem Renaissance. The Harlem Renaissance was centered in a neighborhood of New York called Harlem. Many African-Americans had migrated to this area because land there had been allotted by chance to them and there were job and educational opportunities for them there. With the influx of African-Americans into this are it soon developed into a political and cultural center.
While the Harlem Renaissance impacted all the arts it was especially noticeable in the music of the era. Blues and Jazz became very popular forms of music. African-American music is rooted in the polyrhythmic music heard from ethnic African tribes. With the traditional African elements mixed with the European harmonic structure and instruments a whole new form of music was born. Some of the traditional African elements are the call and response, syncopation, timbre, and my favorite the bending of notes.
During the Roaring 20’s jazz was criticized by the critics but it was embraced by the everyday person. Jazz was not just performed by African-Americans; there were white artists who imitated the style. The music was widely popular and original dances such as the Charleston were performed to the jazz music. The influence of the African-Americans on the arts was not confined to the United States; it also had an impact on many European countries. Paris embraced Jazz music and the artists who performed it. Many European nations enjoyed jazz music and incorporated it into their own style. Much of the music we listen to today can trace its roots back to Jazz.
Some of the early Jazz was characterized as Ragtime music. Ragtime music had a syncopated or “ragged” rhythm and was performed on the piano. It was popular in the early 1900’s and was initially dance music for the seedier side of society which were areas where bars, dancehalls, and brothels were located. A famous Ragtime musician was Scott Joplin. My favorite piece by Scott Joplin is The Entertainer. It has a syncopated melody over a march tempo bass line and is fast and upbeat. Mr. Joplin composed this piece in 1902 while living in Saint Louis. The Entertainer is sub-titled A Rag Time Two Step. It was copyrighted on December 29, 1902 and published by Johns Stark & Son.

'A collection of blues, ragtime, and crossover tunes for the 4-course mountain dulcimer equipped with a 6+ fret. These arrangements vary in difficulty, but all possess the universal appeal of the unique rhythms that define this musical genre. Most Important similarity between ragtime and blues Is that they both were essential to development of Jazz, and both were the music style of the late sass’s.According to Ted Tioga in his book The History of Jazz, “Ragtime music rivals the blues In Importance – and perhaps surpasses It In Influence- as a predecessor to early jazz” (up.

Some Jazz music also used improvision. Meaning it would be composed on the spot. One of the greats who excelled at this improvisaiton was Louis Armstrong. Louis was an extremely talanted trumpet player and a vocalist. He often used his voice to bend the melody and lyrics of the song. Louis also was a skilled scat singer, using nonsense sounds instead of real lyrics. He did not compose much written music but his improvisation was composition enough. The type of Jazz and Blues he played had a great influence on Swing and Big Band music. Potato Head Bluesby Louis Armstrong is often considered on of his finest recordings. Louis Armstrong composed this piece in 1927 and was recorded by Louis Armstrong and his Hot Seven in Chicago, Illinois. Artists on the recording are Louis Armstrong, trumpet; Honore Dutrey, trombone; Johnny Dodds, clarinet; Lil Armstrong, piano; Johnny St. Cyr, banjo; Pete Briggs, tuba; Baby Dodds, drums
Originally released on Okeh 8503. Louis’ trumpet work in this piece is absolutely amazing.

A great Blues artist is Robert Johnson. His type of blues was very influencial in the development of blues-rock and early rock and roll. Much of his work was composed on his guitar. His vocals was very powerful emotionally. In his song Kind Hearted Woman Blues you can hear the only guitar solo he ever recorded. He is plaing rhythm and lead guitar on one instrument which is a testiment to his talent. Kind Hearted Woman Blues was recorded as a single on November 23, 1936 in San Antonio, Texas for Vocalion. It was the B side to Terraplane Blues and was released in March 1937.

From these three samples of African-American music in the early 1900’s we can see how their culture changed music. Their early works became quite popular around the world and set the stage for the progression of modern music. The music that came from this era profoundly changed music forever.