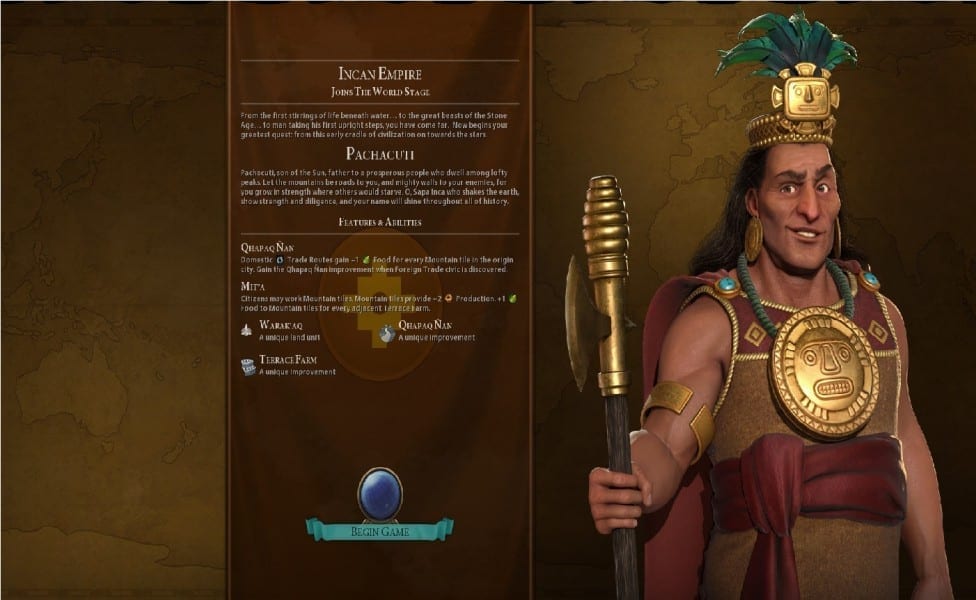 Civilization Leader: Eleanor of Aquitaine
Leader Agenda:
English Capital:
French Capital:
Leader Bonus: Court of Love – Great works in Eleanor’s cities leads to a loyalty deficient in other civilization cities withing 9 tiles. If a city leaves a civilizastion and Eleanor is the the Civ with the most loyalty pressure the city skips the Free City phase.

Eleanor was raised in a court that was both wealthy and cultured, and when she assumed the title of Duchess of Aquitaine on William's death, she married the crown prince of France, who became Louis VII when his father, Louis the Fat, died. My favourite Civ in Civ 6 by far is Eleanor of Aquitaine (English). When her loyalty passive works it's hilarious though the problem I have is excelling her traits into a win rather than just an upper-hand. I feel as though religion for her is useless but other than that I don't know what victory condition I.

From the start of Civilization 6, it has been kind of cool to have the idea of multiple leaders for civilizations all with their different bonuses. Indeed, the way the bonuses are set up it allows you the ability to mix and match, for example, are you going to have a more cultural game with Pericles or a more warlike game with Gorgo? However, while this is a good idea, it has not been explored all that much in the base game with only two sets of dual leaders. It seems that Firaxis mostly intent to leave this to the mod community. Well, today we get something a little different with a leader that is an alternative for not one but two civilisations, and it works, both from a game and history perspective.
Of course, the first thing is that you can use Eleanor when playing as both England and France, and indeed, they even made different character models depending on which civ you pick. Whichever one you do pick, her bonus is the same, but what a bonus it is. So you can use Great Works to push disloyalty on neighbouring civ’s cities. This in itself is a really cool power (and maybe explains England’s redesign, bye bye the British Museums), however, the cherry is that if you do knock a city off, it goes straight to you with no Free City period. This means that you can go straight to pushing out loyalty pressure for your new city right away, and not have to deal with another civ sniping it away from you, or the free city units messing with your stuff.
At the moment, you would think that Eleanor would play more into France’s bonuses because you can get some of those big Great Work holding Wonders up. However, more cities tend to be good cities, or at least denying a competitor an advantage. Which probably makes Eleanor one of the more generalist leaders in the game. Also, there is a lot of work setting up cities on your border with Great Work slots, so it will be interesting to see how well it all works practically.
I know that having leaders that were not actually the official de jure ruler of the civilization is frustrating for some, and I do see why. I think Eleanor is a fantastic choice in the game, and frankly, it makes sense that she could be used as a leader for both England and France. Also one the really interesting things about this expansion was learning about all the new leaders, and wow did Eleanor live a life, and then some.
Now, this is taking the dual leader mechanic into a new and interesting place, but it is a civ that I would have to play with a bit more to be certain.

By Brian MacNamara: You can follow Brian on Twitter Here, when he’s not chatting about Movies and TV, he’ll be talking about International Relations, or the Solar System.
What Civs would you like to see in Civ 6 Gathering Storm?, let us know what you thought in the comments below, feel free to share this review on any of the social medias and you can follow us Here. Check out all our past reviews and articles Here, and have a happy day.﻿