What if there was a simple, inexpensive mineral supplement that would work for weight loss, lower appetite, lower body fat, and lower blood sugars? What if you also knew that Americans have a 90% chance of being deficient on this essential mineral, especially if you are overweight? Would you be interested? I suspect you would. Please read on…

In 1977, a patient at Toronto General Hospital received intravenous nutrition for 3 ½ years. She developed high blood sugars, nerve damage, and high triglycerides in her blood. All this resolved with chromium. This was the first documentation of human chromium deficiency. The epidemic of inadequate chromium is now well documented, with high blood sugars, high triglycerides, and unwanted weight gain. Any of that sound familiar? If so, it may partly be explained by inadequate chromium.

Look at the evidence for chromium deficiency reported in the American Journal of Clinical Nutrition:

Due to low chromium in common chromium-containing foods (i.e. eggs, bread, milk, tuna, apples, oranges, rice, lettuce, tomatoes, etc), you would need LOTS of food and over 10,000 calories per day to get adequate chromium. Do you see the problem? Our common foods that have some chromium are still very low in chromium!

But don’t worry, the Mayo Clinic website has the answer. They recommend chromium-rich foods like brewer’s yeast, calf liver, and wheat germ! Hmmm…. not exactly top choices for most of us. No wonder we are deficient!

Although minimum recommendations are 120 mcg of chromium per day, the ideal amount seems to be closer to 1,000 mcg per day, especially for those with diabetes, metabolic syndrome, or excessive weight gain.

Does chromium supplementation work? Let’s look at some compelling research…

This means that the most common finding with low chromium is “sugar intolerance”, which leads to weight gain from sugar, an elevated blood sugar, pre-diabetes, high blood insulin, and/or diabetes type 2.

Other researchers in 1998 (Journal of the American College of Nutrition) concluded that chromium has benefits without known side effects in people with glucose intolerance and diabetes, improving blood sugars, cholesterol, and HgA1C levels.

Research has shown that Chromium GTF causes greater loss of fat and less loss of muscle than dieting without chromium. A study in weight lifters showed much greater muscle gain with chromium!

The Journal of Psychiatric Practice in 2005 studied a dose of 600 mcg of chromium in patients with atypical depression, most of whom were overweight. They found that chromium reduced appetite, improved carbohydrate cravings, lowered overall eating, and, coincidentally, that low sex drive improved. These are all common symptoms of depression; so all symptoms were of interest to the researchers. The bottom line is that if you have experienced stress or some depression symptoms and weight gain, chromium may work for you!

In fact, patients taking chromium “automatically” reduced food intake by 207 calories per day, simply because of decreased cravings for carbohydrates and sweets!

Why Chromium GTF over Chromium Picolinate and other chromium compounds?

Chromium GTF is chemically known as chromium polynicotinate. It is chromium that is chemically bound to natural Vitamin B3 (nicotinic acid or niacin) creating a safe compound that functions as a glucose tolerance factor (GTF). This very natural version of chromium supplies Vitamin B3 and chromium at the same time. The result is better absorption and more confidence that the chromium will actually work. It has been determined safe at up to 350 times the reference intake.

At the Center For Nutrition, we recommend Chromium GTF tablets with 200 mcg of chromium polynicotinate. If you have unwanted weight gain, carbohydrate cravings, an excessive appetite, or problems with sugar or fat metabolism, consider a total of 1,000 mcg of chromium daily. Check your multivitamin for chromium. If you are in excellent health, at an ideal weight, 1 tablet daily may be enough. For the rest of us, adding enough to get to the 900-1100 mcg per day is recommended. Adding 2-5 Chromium GTF tablets per day, depending on your multivitamin, will guarantee what we believe to be an optimum dose.

Chromium is an essential mineral that is required by the body in trace amounts. Its role in maintaining blood sugar levels was first identified in 1957 by a research scientist named Walter Mertz who discovered a naturally occurring substance that normalized blood glucose levels. He called this substance glucose tolerance factor (GTF). Chromium is currently thought to be the most active component of GTF with other nutrients related to GTF including nicotinic acid (vitamin B3) and the amino acids that constitute the antioxidant molecule, glutathione (glutamic acid, cysteine and glycine).

Whether GTF is an actual chemical compound or not has not been clarified by scientists. Yet, they are clear that the nutrients that are related to GTF whether or not they actually assembled into a single chemical structure play an important role in blood sugar balance.

Physiological events that may signal a need for greater chromium intake

As an active component of glucose tolerance factor (GTF), chromium plays an integral role in controlling blood sugar levels. The primary function of GTF is to increase the action of insulin, the hormone responsible for ushering glucose into the cells where it can be used as an energy source.

When blood sugar levels begin to rise after the consumption of a meal, this alerts the pancreas to secrete insulin in response since insulin lowers blood glucose levels by increasing the rate in which glucose can enter the cells. GTF is thought to initiate the attachment of insulin to the cells insulin receptors, a process necessary for insulins ability to function properly.

Metabolism of nucleic acids and cholesterol

Chromium is involved in the metabolism of nucleic acids, the building blocks of DNA in every cell. Additionally, chromium is also thought to participate in cholesterol metabolism and may therefore play a role in normalizing blood cholesterol levels.

Causes and symptoms of chromium deficiency

Conditions such as diabetes and heart disease increase chromium excretion and therefore increase the amount of chromium needed by the body. Mental stress as well as physical injury and trauma also increase chromium excretion, plus they increase the bodys need for chromium through another mechanism. When the body is under stress, it increases its output of certain hormones that can consequently alter blood sugar balance, creating the demand for more chromium.

Because commercial food processing methods remove most of the naturally occurring chromium from commonly consumed foods, dietary chromium deficiency is believed to be widespread in the United States. Insulin resistance, a condition where body's cells do not respond to the presence of insulin signaling them to usher in glucose from the bloodstream, is a manifestation of chromium deficiency. Insulin resistance can consequently cause hyperinsulinemia and hyperglycemia, and lead to the development of diabetes and/or heart disease.

Chromium deficiency need not be severe for related consequences to occur. Mild dietary chromium deficiency is associated with Syndrome X, a medical condition that manifests in an array of symptoms including hyperinsulinemia, hypertension, elevated triglyceride levels, hyperglycemia, and low HDL cholesterol levels. All of these symptoms increase a persons risk for developing heart disease. 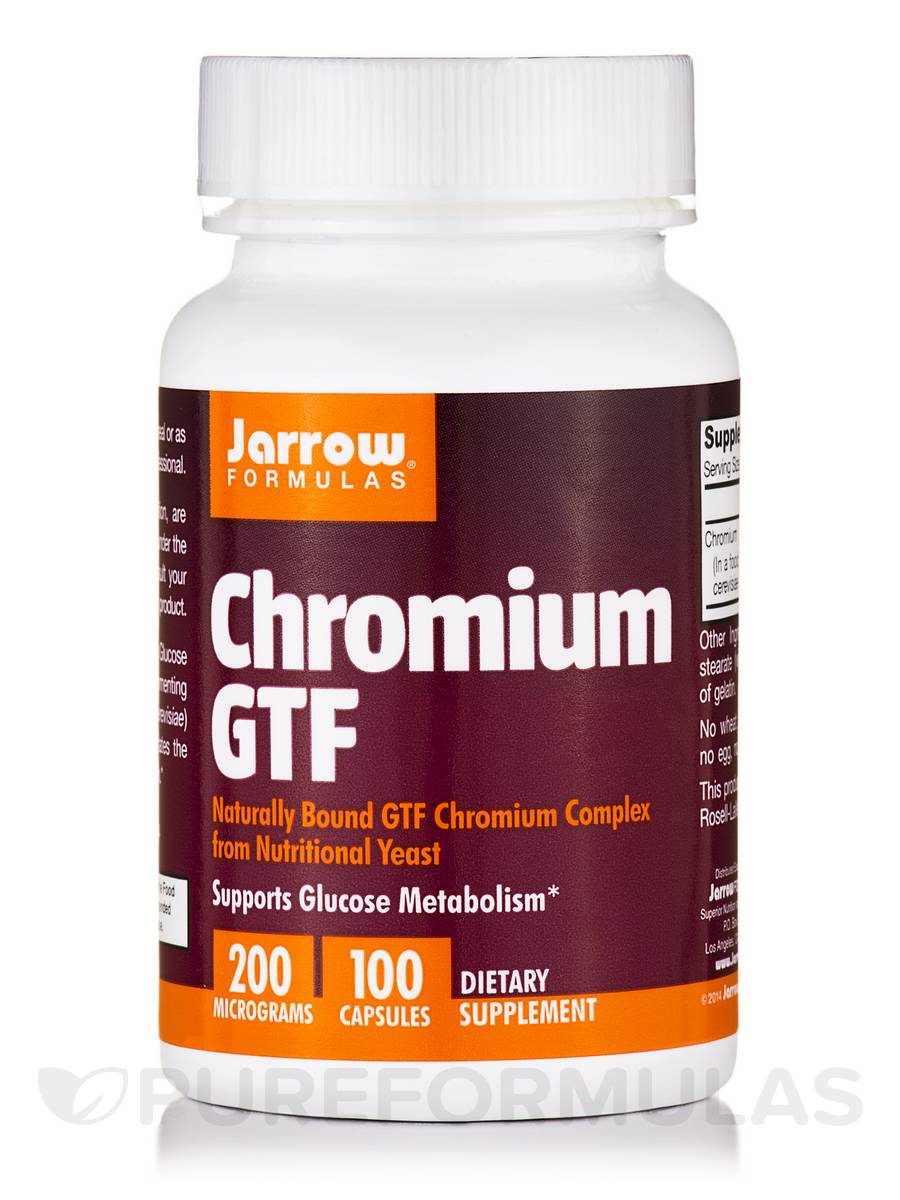 Causes and symptoms of toxicity

In 2001, when the Institute of Medicine at the National Academy of Sciences reviewed research on chromium, they concluded that excessive intake from foods or supplements was not associated with any adverse effects and therefore they did not establish a Tolerable Upper Intake Level (UL) for this mineral. They did caution that individuals who have liver or kidney disease should avoid taking chromium supplements in higher than recommended amounts since these persons are more susceptible to adverse effects from excessive intake.

The effect of cooking, storage and processing on chromium

Most food processing methods reduce the chromium content of foods. While chromium naturally occurs in the bran and germ of whole grains, these components are removed when whole grains are milled to make flour. Additionally, the refinement process used to turn sugar cane and sugar beets into table sugar (sucrose) removes most of the chromium that occurs in these plants. Yet, there are a few conditions where chromium is increased during cooking. One example is that when acidic foods are cooked in stainless steel cookware chromium is leached from the cookware and can accumulate in the food.

Interactions between medications and chromium

If you are taking insulin or an oral glucose-lowering medication (i.e., Diabeta or Micronase), speak with your healthcare practitioner before taking chromium since the mineral can cause blood sugar levels to drop. S/he may need to decrease your current dose of medication so that your blood sugar levels do not significantly decrease.

Medications that decrease absorption of chromium:

Medications believed to increase the absorption of chromium:

Interactions that occur between chromium and other nutrients

Phytic acid, a compound found in grains, can bind to chromium, forming an insoluble complex that prevents the mineral from being absorbed. Yet, whole grains do contain significant chromium content, and it does seems that the activity of the phytic acid in grains does not prevent chromium absorption. Therefore, a diet that is rich in whole grains does not seem likely to be able to increase your risk of developing chromium deficiency.

The absorption of chromium is enhanced by ascorbic acid (vitamin C).

Individuals who have the following health conditions should pay special attention to their chromium status:

Forms in which chromium is found in dietary supplements.

Foods that are concentrated sources of chromium

While chromium occurs naturally in a wide array of foods, many food processing methods often remove much of it. Additionally, for the foods that do retain their chromium content, many are believed to only contain a small amount, in the range of 1 to 2 micrograms (mcg). Therefore, unfortunately, it can be difficult to easily obtain a sufficient amount of chromium from dietary sources. What compounds this problem further is that the determination of a foods chromium content is difficult due to inadequate analytical tools. Consequently, currently available food composition databases do not contain accurate information about the amount of chromium found in various foods.

Taking this into consideration, the following foods are thought to provide a significant amount of chromium: bran cereals, brewers yeast, liver, onions, oysters, potatoes, tomatoes and whole grains. Since beer and wine can accumulate chromium during the fermentation process, they are therefore considered to be dietary sources of the mineral.