In 1865 the 13th amendment of the constitution was ratified, abolishing slavery in the United States forever. As a result an entire population of citizens was now free to pursue their education and their artistic dreams. The next generation saw the development of new musical styles; the American art-forms of blues, ragtime and jazz. 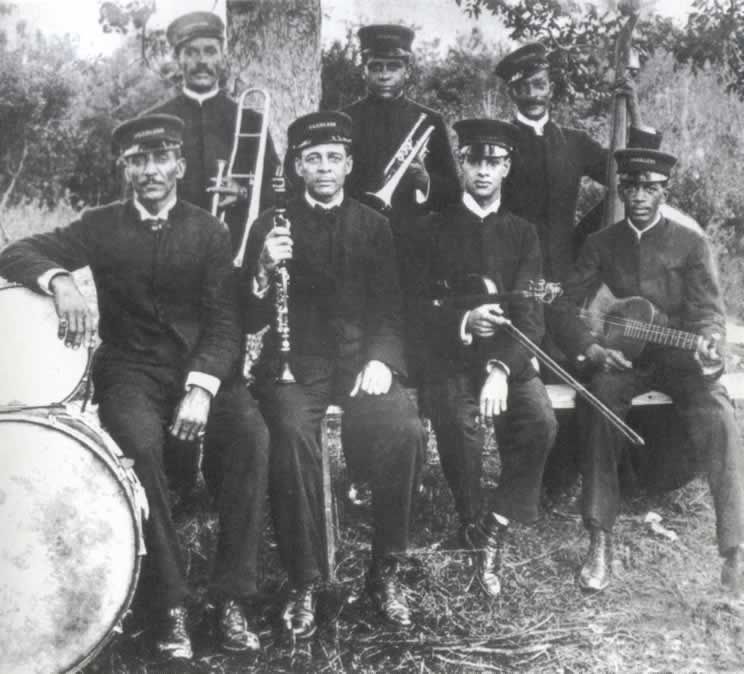 “The Blues” came from the American south in the late 1800’s. It blends together the work songs, spirituals, chants and ballads of the African-American community. Besides the obvious expression of sadness and melancholy, the blues also introduced stylized scales, chords and unique forms. “Blue notes” are often seen as flattened thirds or sometimes even pitches between notes, blurring the rules of traditional harmony. The form of the 12-bar blues has become ubiquitous in popular music around the world.

“Ragtime” was born in the African-American communities of St. Louis in the 1890’s. This style takes traditional march form, much like the music of John Philip Sousa, and adds the syncopated, or “ragged”, rhythms of African music. The style fell out of favor in the early 20th century with the rise of jazz but many compare the American rag to European minuets, mazurkas and waltzes. The rhythm of ragtime had an influence on later composers, such as Satie, Debussy and Stravinsky.

The RED ROSE RAGTIME BAND was formed in the early 1980's in the Chicago,Illinois, area with the express purpose of playing a musical repertoire reflecting almost every aspect of early jazz music, including ragtime. Today, the Red Rose has perhaps the widest variety of traditional jazz sound of any band in America. The Ditty Bops is a band from Los Angeles, California that play a blend of folk, bluegrass, jazz, swing music, ragtime and musical theater.

The word “Jazz” means pep or energy. This style was born in the taverns of New Orleans at much the same time and with the same influences as blues and ragtime. But jazz had an added element of Cuban/Spanish culture. Habanera rhythms, blues forms and ragtime drive blended together to form something new. Eventually the rigid rhythms of the beat relaxed to allow a feeling we call “swing”. Swing is hard to define and difficult to notate. As Louis Armstrong stated, “If you don’t feel it, you’ll never know it.” The prohibition of the 1920’s saw the rise of “The Jazz Age” in the U.S. cementing this style and sound into American culture.

American orchestras and conservatories were slow to recognize these styles, but their European counterparts embraced them openly. Maurice Ravel saw in American jazz a fresh expression of harmony and rhythm that he borrowed in a great deal of his later works.

Timeline is an exploration into the development of Western music. Take a journey into the events, characters and concepts that shaped our Western musical tradition.